I apologise for only writing now, but last night I was just too tired. This morning Susanne and I took the long (and straight) road to the end of the Zambesi Strip (the old Caprivi Strip).

Yesterday was an incredible day in the history of Alzheimer’s Dementia Namibia. We had our first appointment at 8am with the nursing management team of UNAM (University of Namibia) in their boardroom. (Boardroom sounds so important?!) There were about 8 women. I showed them our slide show featuring Ndjinaa as a starter. I also explained to them the future of ADN as we plan to educate people in order to spread the word on dementia so that Namibia can be a country of dementia friendly towns, villages and shops.

After this, questions rained down on Susanne and I. The management team explained to me that they too have visited Germany earlier in the year to gain more knowledge on looking after the elderly and also for a curriculum change they plan in 2015 about dementia. They explained that the caring that they saw for people with Dementia stunned and impressed them. They wanted more information about our house at Yakandonga and if their students would be able to live there if they sent them there for their practical.

I think the main question was this: ‘What role can the medical school of UNAM play in the vision of ADN?” We toyed with the idea that ADN and the medical school will have to take hands in the education of future nurses in the nursing/caring of people with dementia. My idea is that ADN does not have to start a dementia academy if we can work with UNAM on this regard.

We were asked to return at 14h00 to meet the rest of the staff and to share with them too our vision and the story of Ndjinaa. They reckoned that everyone needed to be familiarised with ADN to make the best possible decision for the future.

And so we returned at 14h00 to enlighten a further 20 staff members on the education of people with dementia and the training of carers so that people with dementia can enjoy a life a quality. The two lecturers of psychiatry that is currently busy creating a dementia program indicated that they would contact me. Also present was the adjunct deacon, Ms Van Der Westhuysen, who originally invited me to UNAM and she indicated that there is a possibility of a future talk to affiliate the ADN training program with that of the UNAM medical school.

Talks have started and I firmly believe that ADN will no longer be seen as just another dream from the smallest Dutch Reformed Church in Namibia, but an important instigator in the freeing of people with dementia – so that those who live with dementia and consider their lives to be ‘finished’ can have a life of quality until their end. ADN will have to play an extremely important role in the medical family of Namibia.

Susanne and closed off yesterday with a visit from another young lady who came to see us because her heart is for people with dementia.

At dinner we met a Herero man from Okakarara (our waiter), who could not believe the photos of a freed Ndjinaa on my phone. He went to call the meat chef, Kami, because Kami is a Himba from a village near Ndjinaa. And Kami could not believe what he was seeing…

Neither Susanne nor I will ever forget the expressions on his face as I showed him the photos. I have never seen anybody as stunned, confused and scared. All he kept saying was: “I see the photos, but I don’t believe it. How can Ndjinaa not be in chains? Why doesn’t she walk away? And why isn’t she aggressive and throws stones?” All this he questioned while wildly waving his chef’s knife. He called all the staff members to come and have a look. Then he finally said: “What did you do? Did you give her some kind of pill?” But I think he wanted to know whether I too, just bewitched her? All I could say was that we gave her the pill of love. And he said: “Love cannot do this. You did something else and I want to know what.”

Susanne and I waited until 11pm for him, but there were just too many guests and we left. Kami is probably working tonight again and I hope he is still cutting his meat and wondering about Ndjinaa.

I have to say good night, tomorrow is another long road and a lot of hours under trees (and in the sun) having conversations about the possibility that witchcraft is the African’s dementia/Alzheimer’s.  I think we should maybe recommend to Alzheimer’s Dementia International that they should have Bewitching Conference in Africa instead of Alzheimer’s Conferences… 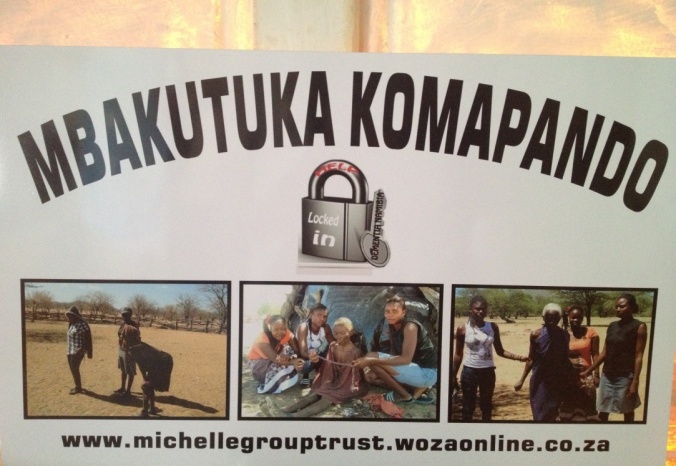