We arrived at Kapika’s village (Omuramba) with an army of helpers. Nearly every staff member of Epupa Falls Lodge & Campsite was present as well as our friends from the Czech Republic – Martin, John, Als and Susana. (I can’t remember the names of the other two). Although the Czechs are probably used to a lot more, they did not mind travelling on the back of Koos’s pick-up. They helped pack and unpack the Cruiser, clean the area and put up the new tent. 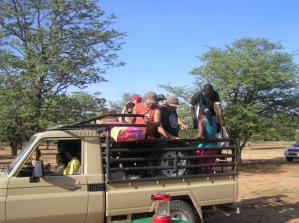 Team Czech arriving with Koos on his pick-up

One of the Czech ladies working hard on her holiday.

Since the day I have met Ndjinaa, doors have opened for me both locally and internationally. But what I have really learned is that we as human beings are all equal. We are all children of God and we all need unconditional love. What happened today in Mbakutuka Komapando was a team effort between six Czechs, two Afrikaners, seven Himba’s, three caretakers and four of Epupa Falls Lodge’s staff. This for me is church – the true body of Christ. 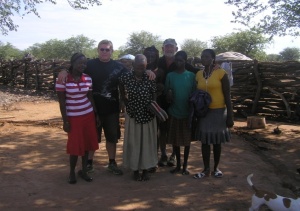 After the photo, Ndjinaa and Kaputu walked the 500m to their new home. Ndjinaa walked fast and quite far ahead of Kaputu, Venoo and Nancy. It was as if she was in a hurry to get to her new village where she would be allowed be Himba and human again. It was a long wait for her to be acknowledged again as part of her tribe, to be woman and grandmother of purpose again. But she carries a powerful message to Africa: ‘Let the people with dementia live a quality life until they die. Uhuru not only for certain Africans, but for all Africans.’ 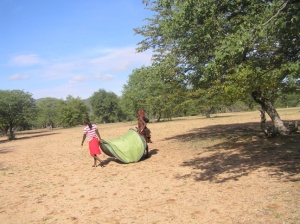 Arriving at their new village

Ndjinaa in a hurry to her new village

Upon reaching Mbakutuka Komapando, Ndjinaa and Kaputu sat down in the shade of the many Mopanie trees. It was as if they were watching the progress of their new village. Then Ndjinaa started giving me instructions through the translator. “You need to make a hole” she said. I asked Grace, my translator what she meant. “A whole for water,” Ndjinaa replied. And then I understood. Ndjinaa wanted a bore hole or a well. When she noticed that I started to understand she said; “And then you must build a place to put the water inside so that it can be kept cool.” Then it hit, when the Himba’s built a village, they dug a bore hole and a hut around it where they kept their maize and other food. “We will do that Ndjinaa,” I told her. I could see she was impressed with my understanding. I also realized that she was no longer asking or requesting – she was rather giving orders now as the chief of her onganda (village). She closed off saying; “ I want tobacco from Sesfontein”.

For twenty years; “I want tobacco from Sesfontein” was simply her way of asking (begging) for water and food. Ndjinaa now was way cleverer than I realized. She led me step by step to tell me that we were all so busy building and moving that we did not offer her or Kaputu any water. I corrected this ignorance quickly by asking someone to bring them water. On the day I first met Ndjinaa she also used this sentence. Everyone always used to give her tobacco, but I told my care workers to first give her water, then food and finally tobacco when she used this sentence. And it always worked. She either wanted water or food. This taught me to listen, respond and listen to people living with dementia. It is possible to hear people with dementia even if you do not speak the same language or have the same cultural background. It is a choice that one needs to make. And if you really want to and you take time, you can learn a person’s life story.